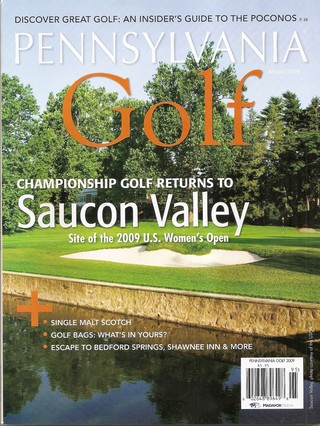 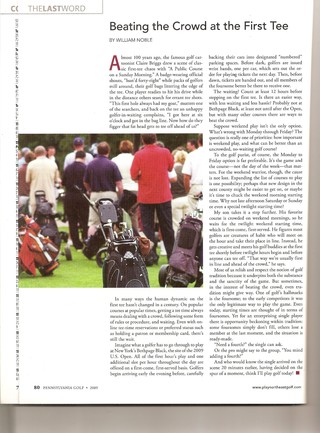 "Beating the Crowd at the First Tee"

Almost 100 years ago, the famous golf cartoonist Claire Briggs drew a scene of classic first-tee chaos with "A Public Course on a Sunday Morning." A badge-wearing official shouts "hun’d forty-eight" while packs of golfers mill around, their golf bags littering the edge of the tee. One player readies to hit his drive while in the distance others search for errant tee shots. "This first hole always had my goat," mutters one of the searchers, and back on the tee an unhappy golfer-in-waiting complains, "I got here at six o’clock and got in the bag line. Now how do they figger that fat head gets to tee off ahead of us?"

In many ways the human dynamic on the first tee hasn’t changed in a century. On popular courses at popular times, getting a tee time always means dealing with a crowd, following some form of rules or procedure, and waiting. Even with on-line tee-time reservations or preferred status such as holding a patron or membership card, there’s still the wait.

Imagine what a golfer had to go through to play at New York’s Bethpage Black, the site of the 2009 U.S. Open. All of the first hour’s play and one additional slot per hour throughout the day are offered on a first-come, first served basis. Golfers begin arriving early the evening before, carefully backing their cars into designated "numbered" parking spaces. Before dark, golfers are issued wrist bands, one per car, which sets out the order for playing tickets the next day. Then, before dawn, tickets are handed out and all members of the foursome better be there to receive one.

The waiting? Count at least 12 hours before stepping on the first tee. Is there an easier way, with less waiting and less hassle? Probably not at Bethpage Black, at least not until after the Open, but with many other courses there are ways to beat the crowd.

Suppose weekend play isn’t the only option. What’s wrong with Monday through Friday? The question is really one of priorities: how important is weekend play, and what can be better than an uncrowded, no-waiting golf course?

To the golf purist, of course, the Monday to Friday option is far preferable. It’s the game and the course -- not the day of the week -- that matters. For the weekend warrior, though, the cause is not lost. Expanding the list of courses to play is one possibility; perhaps that new design in the next county might be easier to get on, or maybe it’s time to chuck the weekend morning starting time. Why not late afternoon Saturday or Sunday or even a special twilight starting time?

My son takes it a step further. His favorite course is crowded on weekend mornings, so he waits for the twilight weekend starting time. Which is first-come, first-served. He figures most golfers are creatures of habit who will meet on the hour and take their place in line. Instead, he gets creative and meets his golf buddies at the first tee shortly before twilight hours begin and before anyone can tee off. "That way we’re usually first in line and ahead of the crowd," he says.

Most of us relish and respect the notion of golf tradition because it underpins both the substance and the sanctity of the game. But sometimes, in the interest of beating the crowd, even tradition might give way. One of golf’s hallmarks is the foursome; to the early competitors it was the only legitimate way to play the game. Even today, starting times are thought of in terms of foursomes. Yet for an enterprising single player there is opportunity beckoning within tradition: some foursomes simply don’t fill, others lose a member at the last moment, and the situation is ready-made.

"Need a fourth?" the single can ask.

Or the pro might say to the group. "You mind adding a fourth?"

And who would know the single arrived on the scene 20 minutes earlier, having decided on the spur of a moment, think I’ll play golf today!

For other golf writings of mine, click on here to visit playnortheastgolf.com