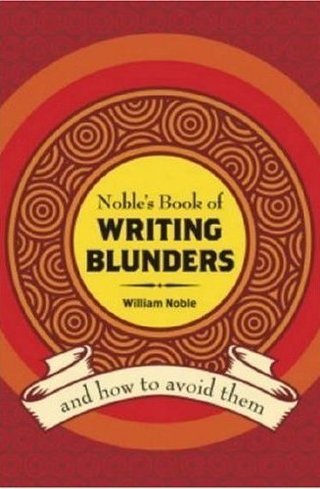 NOBLE’S BOOK OF WRITING BLUNDERS... and how to avoid them

DON’T WRITE FOR YOUR EIGHTH-GRADE TEACHER

"There are certain writing rules we have to learn," said the stern-faced woman who was my eighth-grade teacher. She was talll and angular, darkish hair pulled to a modified bun and sharp eyes that missed little. It was the beginning of the school year, and most of us remembered with fondness the urgings of our seventh-grade teacher. "Use your minds, young people; show your imaginations. I want ideas, I want good stories."

The eighth-grade teacher loomed over us now, rolling a piece of chalk in her fingers. As she spoke, the image of that agreeable seventh-grade experience faded. It was obvious that things would be different, and none of us was certain if we were going to like it. Eighth grade, we knew, was a big step, and we’d heard this teacher could make the entire year seem like a century, if she chose to.

We waited, our collective confidence on a knife edge.

She walked to the board and wrote out a declarative sentence. "What word is the subject?" she asked.

"The verb, you mean?" My best friend volunteered that.

She turned her icy glare. "I mean the predicate."

We told her, and she began to draw a series of lines and boxes around, over and under the words in the sentence. Then she put the chalk down and smiled at us. "This is the way you diagram a sentence," she said. "When we’re finished, you’ll be able to see it like the pieces of a jigsaw puzzle, and you’ll understand the rules of proper grammar."

And for the balance of that school year we did, indeed, learn that there were grammar rules, and we saw how they were applied in such books as The Adventures of Huckleberry Finn, A Tale of Two Cities and The Good Earth. We used the rules in our own writing, and we came to understand quickly that grammar rules improperly applied brought the wrath of our teacher and a lower grade.

"There are certain writing rules we have to learn," she said, and she was absolutely correct... as long as we were in eighth grade. That was the time to learn how to diagram a sentence, where to place commas, when to use a participial phrase, whether to place an adjective in front of or after the noun it modifies. These grammar rules (and many more, as well) were necessary to learn so that we could develop order in our writing and understand the rules’ purposes. What she didn’t tell us, but what we also came to understand, was that once we knew the rules, we could feel comfortable violating them.

Because the grammar rules we learned in eighth grade should never be followed absolutely. At best, they are one choice, among several, and at worst, they will dampen our creative instincts.

Take a look at what I’ve just written. I used "because" to begin a sentence. My eighth-grade teacher would be horrified. "Never, ever, use a conjunction to begin a sentence!" But read it again. Doesn’t it flow smoothly from the immediately preceding paragraph? It connects the two paragraphs easily and simply.

Not a complete sentence!

Remember this criticism? No verb, perhaps, or only the fragment of a thought. Our eighth-grade teacher saw this as a deadly challenge to the foundations of written English. ("Sentences are meant to have subjects and predicates, at least!") Here again, the rules makes sense because most sentences have subjects and verbs, and we were learning about other people’s expectations.

But incomplete sentences work, too. So do sentence fragments. It depends on emphasis and rhythm. A single word repeated over and over, for example:

No subjects or verbs here, yet you get a message across to the reader. There’s an abruptness with incomplete sentences or sentence fragments precisely because they don’t follow the conventional structure. They can force a change of pace ...

There’s one thing to remember about the rules of grammar, as you will see throughout this book. They are not rigid; they change as our perceptions of our language change. What satisfied our eighth-grade teacher certainly wouldn’t satisfy an editor, but then our eighth-grade teacher wasn’t trying to be an editor. The rules, however, were there to be learned, and once we learned them, we could believe they applied only when they made our work better.

(See, I ended with a preposition.)