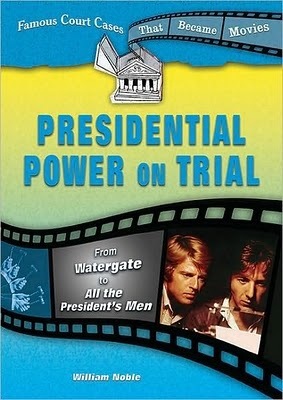 PRESIDENTIAL POWER ON TRIAL: From Watergate to All the President’s Men

On the evening of May 28, 1972, a simple walkie-talkie message was relayed to E. Howard Hunt from inside DNC [Democratic National Campaign] Headquarters: "The horse is in the house." Shortly after, Hunt called James McCord, the wiretap expert, who was waiting across the street in the Howard Johnson Motel: "My people are in; you can go in now." McCord joined the others right away and installed taps on the phone of DNC Chairman Larry O’Brien’s secretary and on the phone of another staff executive. The others rifled through files and took photos of documents.

Before dawn the mission was completed, and the team met in E. Howard Hunt’s room for handshakes and back-slaps. Across the street, at the Howard Johnson Motel, a young lawyer, Alfred Baldwin, sat, earphones in hand, ready to start transcribing whatever came over the taps.

But within a week the sense of elation had dissolved. The wiretap on the phone of Larry O’Brien’s secretary was not working, and the Democratic staff executive’s wiretapped phone was being used, mostly, for personal calls. Also, many of the copied documents were useless. When John Mitchell read them, he barked, "This stuff isn’t worth the paper it’s printed on."

What they needed was a tap on DNC Chairman Larry O’Brien’s phone, not on his secretary’s phone. So the team reassembled, and on the evening of June 16, 1972, the four Miami men, carrying two Minolta cameras for photocopying documents, checked into rooms at the Watergate Hotel. The others joined them. McCord brought three walkie-talkies, giving one to Liddy, keeping one for himself, and supplying the third to Bernard Barker, one of the Miami men. Hunt provided phony CIA identification cards and several hundred dollar bills in case the men needed to bribe their way in or out of the offices. The burglars were given cans of Mace, surgical gloves, lock-picking devices, and electronic wiretap equipment.

McCord then left, took an elevator to the eighth floor, and started back down the stairs, placing a piece of tape over door latches so the corridor doors would not latch shut. He also placed tape on doors in the subbasement garage so the stairwell would be accessible from there. Then he informed Hunt and the others everything was ready.

By now it was midnight, and Watergate security guard Frank Wills began his late-night shift. From across the street, McCord could see lights in the sixth-floor Watergate DNC offices, and he cautioned Hunt and Liddy to remain patient until the offices were dark. About an hour later, Wills discovered a piece of McCord’s tape on one of the garage-level doors. He removed it and continued on his rounds.

Then the lights in the DNC offices went off, and McCord walked back across the street to the Watergate Hotel. But when he and the Miami men tried to enter through the garage stairwell and work their way to the sixth-floor DNC offices, they found the garage door latched.

So one of the Miami men picked the lock and retaped the latch open. They climbed the stairwell to the sixth-floor offices. A short time later, security guard Wills started his second nightly security round -- and found the garage door latch taped once again.

By this time McCord and the four Miami men were in the DNC offices, photocopying and picking the locks to Larry O’Brien’s office.

Downstairs, Frank Wills had an uneasy feeling: the same door, taped twice within an hour -- what was going on?

He called the Washington, D.C. Metropolitan police. Within three minutes an unmarked police cruiser pulled up to the Watergate, and three plainclothes police officers got out. Frank Wills hailed them and showed them the taped door.

The officers told Wills to stay in the lobby and keep a watch on who might try to leave that way. Then, the police began to check each of the Watergate floors, one by one.

Across the street, Alfred Baldwin watched it all unfold from the listening-post room at the Howard Johnson Motel. He could see the team inside the DNC offices, their pencil flashlights showing moving dots of light as they worked. Then, suddenly, he saw two unfamiliar shapes outlined against the office lights.

"We’ve got a problem," Baldwin whispered to Hunt over his walkie-talkie. Some strangers are in the offices, "and they’ve got guns," he said. "They’re looking around the balcony and everywhere, but they haven’t come across our people."

Within a few moments, Hunt and Liddy heard Bernard Barker’s resigned voice over the walkie-talkie: "They’ve got us."

"The great strength of the book is its succinct and compelling narrative of how the Watergate case unfolded."

--Eric Paul Roorda, Professor of History and Political Science, Bellarmine University
"This lively and entertaining book provides a compelling narrative of these important events. It is well-researched, insightful and remarkably objective in its tone and filled with a wealth of primary source quotations."
--Tri-state Young Adult Book Review Committee, May, 2009
"This book is well-written, providing accessibility to a complicated event for laymen and students."
--Association of Region XI School Libraries, April, 2009